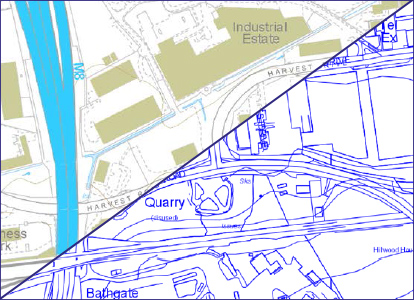 OS VectorMap® is an evolving family of products that offers the choice of letting you create your own backdrop map data.

When working on applications such as showing your location, asset management, planning, environmental analysis or risk modelling, this OS product can be uniquely customised to meet your requirements.

We have this product available in two different format: 1/ GML - default format supplied by OS or 2/ DXF via following this LINK

The total price is based on the following factors:

Area highlighted in blue will be the supplied area.
Use the zoom tool to show full extents of area covered.
Click on the map to add or remove tiles. Tiles selected displayed in list ---->

What is OS VectorMap Local:

OS VectorMap Local is a series of 5 km by 5 km tiles of simple vector GML data covering the whole of Great Britain that has been designed for creating graphical mapping. The product can be used as mapping in its own right or can be used to provide a flexible geographic context reference for customers’ overlay information.

As well as the vector dataset, a number of output styles are suggested. These demonstrate the versatility of the dataset to be styled in the appropriate way to support a multitude of different geographic purposes.

The main characteristics of the dataset:

• Data is represented by points, lines, polygons, and text.
• Feature classes are differentiated by feature descriptions and feature code (FC) attributes.
• No explicit topology other than some polygon features.
• Tiles are complete in themselves; all text falls within the tile body and all polygons that cross tile borders
are closed along the tile edges.
• Road names and Department for Transport (DfT) numbers held as attributes of road alignment features.
• The road casings are feature-coded and cartographically-positioned road text is included as points and
feature-coded (the road text as displayed on 1:10 000 Scale Raster products).
• In addition, additional coverage of road names and numbers are included as points and feature coded.
• There is a FC that represents urban extent.
• Tiles are visually edgematched.
• Artistic ornament, such as large slope symbols, scree, flat rock and so on, are held as vectors and will
render as displayed on 1:10 000 Scale Raster products.
• Content includes contours with the values held as text labels.
• No persistent feature identifiers.
• No feature change history.
• Update is managed by complete tile replacement.

The purpose of OS VectorMap Local data is to support a wide range of customer applications that utilise
geographic information. These may include:
• Banking and insurance
• Land and property
• Navigation products
• Cartographic representation
• Urban extents
OS VectorMap Local topographic features codes are representations of real-world objects, including
buildings, roads, railways, rivers and land area. The data also includes non-topographic features such as
administrative and electoral boundaries, cartographic text and symbols.

What you need to use OS VectorMap Local

This product may be used on a wide range of hardware platforms (provided sufficient memory and storage
facilities are available), varying from desktop PCs using GIS to mainframe computers with
specialised translators and applications.

OS VectorMap Local is supplied as inert data in GML format and does not include software for data
manipulation.
GML is an open standard and the data will need to be translated into the appropriate format for use within a
GIS application.

1:10 000 Scale Raster provides a backdrop map product at a mid-scale on which you can overlay your information, to provide a geographic context for your data. Available in 5km x 5km and in Backdrop Colour (washout), Black and White or Colour.