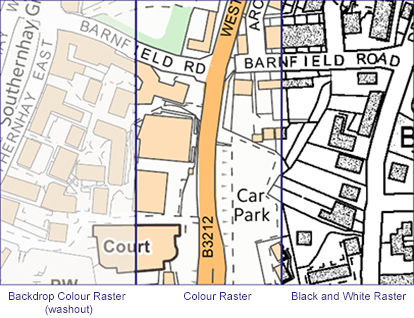 1:10 000 Scale Raster provides a backdrop map product at a mid-scale on which you can overlay your information, to provide a geographic context for your data.
We have it available in 5km x 5km Tiles and in the following formats: Backdrop Colour Raster (washout), Black and White Raster, Colour Raster - these products replace the old Landplan styled 1:10 000 Scale Colour Raster.

The total price is based on the following factors:

Area highlighted in blue will be the supplied area.
Use the zoom tool to show full extents of area covered.
Click on the map to add or remove tiles. Tiles selected displayed in list ---->

Geo-referencing files allow tiles of map data to be located in their correct geographical position when loaded into a geographical information system (GIS).

The geographical information is stored within the Geo-referenced tile so that they will load into to there real world position when loaded into your GIS software package.

You can download a sample tile via the link at the top of the page under the samples tab.

How can I get Sea Tiles for maps?

On the 1st March 2013, Ordnance Survey issues a Formal notice of withdrawal of the 1:10,000 Colour Raster Product (LINK).

The cartographic style used for 1:10 000 Scale Raster was developed in 1995 and customer feedback indicates that this is no longer the styling that most users require.

Ordnance Survey have therefore developed three distinct raster variants of OS VectorMap® Local Raster: Black and White, Colour and Backdrop Colour. The colour versions have been developed based on user feedback and use a careful use of colour. They have created a palette acceptable to users including those with colour vision deficiencies (colour blindness). OS VectorMap Local Raster has also been designed to match the output styles of other Ordnance Survey’s products.

Electricity transmission lines carried on single poles are shown in 1:10 000 scale basic areas (mountain and
moorland) only. Those extending into other geographic areas are terminated at suitable points of detail or at
a pole in a surveyed position either just inside or outside of the basic area.
The underground portions of the railways in London are not shown and stations whose entrances appear at
surface level are described as Sta.

OS VectorMap® is an evolving family of products that offers the choice of letting you create your own backdrop map data. Designed for GIS use. 5km x 5km Tiles in GML.